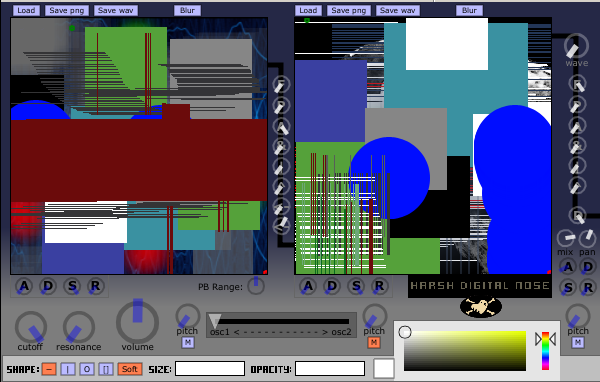 Harsh Digital Nose a synthesizer that converts two images into two oscillator waveforms and then mixes them in various horrible ways. You can drag and drop images or draw them on the plugin in real time.

An earlier version of this was my entry in the 2009 KVR Developer Challenge. Since then I added a lot of things, then stopped working on it and now months later I have no idea how to use it.

Something like this:
There are two image-based oscillators. The knobs between them apply to the second image, based on the first image. There is then a third oscillator that plays ordinary waveforms, which can be modulated by the image oscillators. The "M" button below each pitch knob toggles on/off the oscillator pitch following input MIDI notes. The little green and red dots on the images are the start and end points of the oscillator waveform. Colors in the images do "something" but more information will follow once I look at the code again to see what is actually going on.

Demo "songs" (these are loud and annoying, and of course harsh):
HDNdemo2 - One sustained note, using the images in the above screenshot, with knobs being adjusted.
not analog - Playing notes with one hand while drawing the images with the other hand. 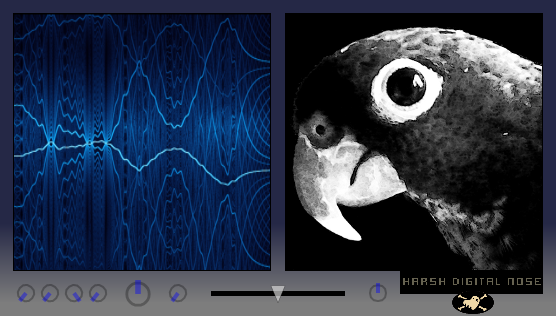 This is the version that was made for the KVR Developer Challenge 2009. Started working on it very close to the deadline, otherwise it would have been more interesting.

Plays two images (very poorly) as oscillator waveforms. The brightness of each pixel, starting at the top left, sets the amplitude of each sample.